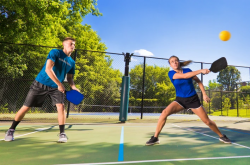 ● I am new to pickleball, learning scoring and rules
● I can hit at least 3 forehand shots in a row without an error
● I have a hard time sustaining a rally in games

● I can keep short rallies going but fail to return balls frequently, and occasionally miss the ball entirely.
● I have played a few games and knows how to score and know some of the basic rules of the game
● I am learning how to serve and be accurate with my serve
● I am developing a consistent forehand

● I am starting to learn to judge where the ball is going and can sustain a short rally with players of equal ability
● I still have weaknesses in my strokes, but I am working on improving them
● I can keep score and am familiar with the court positions for doubles play.
● I’m still reluctant to come to the net.

● I can sustain longer rallies returning 4 or more shots without an error
● I can make easier volleys and use the backhand more often but need to work on stroke development
● I think more about coming to the Non Volley Zone (NVZ) and am starting to become more aggressive in my play
● I am beginning to use dinks and lobs, but don’t fully understand when and where they should be used.
● My serve has becomes more reliable, with at least half landing in the target area
● My knowledge of the rules continues to improve
● My court coverage is still a little weak but improves consistently.

3.0 Intermediate
● I am fairly consistent on the serve and serve return when hitting medium paced shots – at least 6 of 10
● I demonstrate improved skills with all the basic shots, strokes and placement, but need to improve control when trying for direction, depth or power on these shots.
● I am using dinks and lobs on a regular basis as part of my game

● I have have achieved stroke dependability with directional control on most medium paced and some harder hit shots
● I still need to develop more depth and variety with my shots but I am exhibiting more aggressive net play
● I anticipate the opponent’s shots and I am developing team work in doubles.

● I am starting to move past just banging the ball to use the “third shot drop” and mix play with dinks, soft shots, more pace, angles and lobs.

● I have dependable strokes, directional control and depth on forehand and backhand strokes
● I use lobs, overheads, approach shots, and volleys with success and occasionally force errors when serving
● I am successful with third shot drops, dinks, pace mixture, angles and lobs are now regular parts of my game.
● I fully understand the rules, and can play by them
● I understand the importance of “keeping the ball in play” and the effect of making errors.
● Rallies may only be lost due to impatience.
● My teamwork in doubles is evident

● I have mastered all the skills, shot types, touch, spin, serves and can control the depth of my shots, and handle pace.
● I have excellent shot anticipation, extremely accurate shot placement and regularly hit winning shots
● I force opponents to make errors by keeping the ball in play
● I anticipate opponents shots resulting in good court positioning
● I have mastered shot choices and strategies, varying these and my style of play according to the opponents strengths and weaknesses, and court position 2
● I can use an excellent shot mix, soft, dinks, pace, angles and lobs to set up offensive situations.
● My unforced errors are kept to a minimum to take advantage of my opponent’s errors.

● I have the skills and have been mastered all shot types, with touch spin serves all controlled to use as weapons
● I have excellent shot anticipation, extremely accurate shot placement, and frequently winning shots
● I force the opponent’s error by keeping the ball in play.
● I have mastered the dink and drop shot
● I have mastered the 3rd shot choice and also strategies
● I use soft shots, dinks and lobs to set up offensive situations
● I have mastered the strategies and can vary them and their style of play to compete.
● I am dependable in stressful situations as in tournament or match play
● My athletic ability, quickness, agility and raw athleticism are also qualities that separate the top players from those near the top

*If a player is registered on more than one team within the league, they may only play for one team in the playoffs.

*All players must agree to the Fray Liability Waiver as described in the Fray Terms and Conditions section of Player Registration.

We accept individual player payments and allow prepayment for additional players and/or full teams. We are also proud to welcome those who do not have a full team (small groups and free agents) to participate in our league.
Because our mission is to make fun possible, these policies make it easier for people to get involved with and build community through social sports.

All registrations are on a first come, first serve basis. Any roster that does not reach our official size (based on each sport) is eligible to receive free agents and/or small groups. Rosters made up of primarily free agents and/or a collection of small groups may have more players than the standard roster size. This policy is in place to help ensure free agent teams are able to consistently field a team each week.

4. Substitute players (players not on the roster) may be used at any time in the regular season. Substitutes are not permitted during playoffs.*All substitutes must be a registered player on another team and/or in another Fray league that is currently in play.*Teams may use additional substitute players above the player minimum with the opposing team’s consent. Teams who agree to play under these conditions must notify the Host before the start of the game and the outcome of the game will stand as is.

6. Teams must designate a captain prior to the start of the game. They are the only team member allowed to discuss calls with officials. Judgement calls by an official may not be disputed.

1. For teams with more than one player on your roster, you will rotate out in between each game of your match. You may not switch players mid game.

After the ball has bounced once in each team’s court, both teams may either hit the ball before it bounces or play it off a bounce.

// Non-Volley Zone aka “The Kitchen”

*If time expires in the middle of a game, the team with the most points will be declared the winner of that game. If less than a two (2) point difference exists between scores the referee or league host will set a point cap and the teams will play till the first team reaches that point.

*Second Forfeit – Loss of game and Fray reserves the right to remove team the playoffs.

Our Mission: At PHX Fray we’re on a mission to make fun possible. Through social sports leagues and special events, we help you connect with friends, making new ones and play more often. All of our leagues, policies & rules are built to support the #FrayLife mission!

All good games have some guidelines. Here’s some to keep you playing all season long:

Players have 4 sweet ways get in on the action:

**Due to supply chain issues during Covid, T-shirt colors are not guaranteed. You may select a team color, but if not in stock, Fray will chose the next closest color available.**